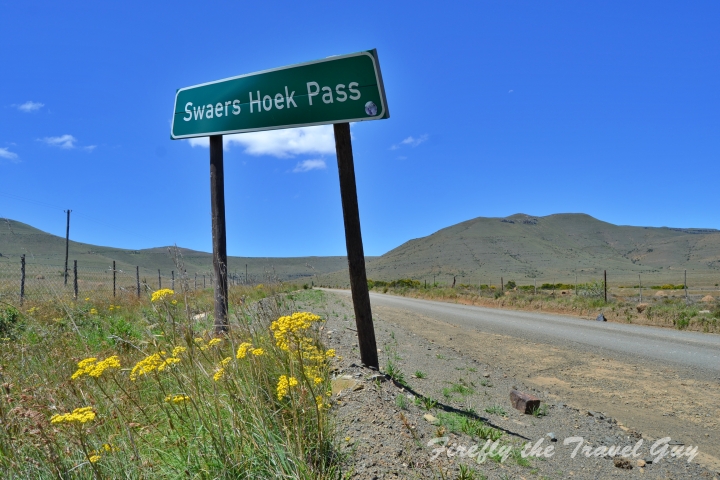 I don’t know how many times my tourism friends in Cradock and Somerset East have asked me if I have driven over the Swaershoek Pass yet. I just heard about the beautiful Karoo landscape and stunning views but because the route is 76km of dirt road I’ve been a little hesitant. But that changed recently when the N10 road outside Cradock was blocked due to protests and I had to take the alternative between the two mentioned towns in the Eastern Cape’s Karoo Heartland.

For most of it, the 76km dirt road wasn’t really bad and the Polo negotiated it comfortably without falling apart. I kept on thinking of friends who got stuck in the mud and snow on the pass without mobile phone reception a couple of years ago. I’m not going to lie, there were some rough spots and it’s probably much more recommendable to take it on with a bakkie or 4×4. Something I, unfortunately, don’t have.

The Swaershoek Pass itself is just over 8km long and climbs about 468m to the highest point at 1981m above sea level.

The drive was actually nice and easy, the problem is that coming from Cradock side most of the view is kinda behind you and I had to make sure I didn’t keep looking back and not keep my eyes on the road. My wife did keep reminding me of it though.

As you drive up you can see the pass hugging the side of the mountain in front and looking back there is an expansive valley with views all the way to Cradock and the mountain beyond. Really awe-inspiring.

Just about at the top, we found a spot with a few rocks and tree stumps set up as seats and a sign on the fence. Eben & Gideon se koffie drink plek! Below it was a second one attached saying, En Nicolene ook! We had so many questions. Who are Eben and Gideon? Two friends or brothers? Do they ride up here with their mountain bikes, motorcycles or car and have coffee here while enjoying the view? How often do they do it? Every weekend, once a month, or perhaps only when in the area on holiday? And then, who is Nicolene? Did one of them get a girlfriend that started joining them? Once curiosity really gets triggered by something like this.

Unfortunately, we didn’t have any coffee or padkos, but we did stop to enjoy the coffee view and then it was back to our journey, heading towards Somerset East.

The view from Dam se kop