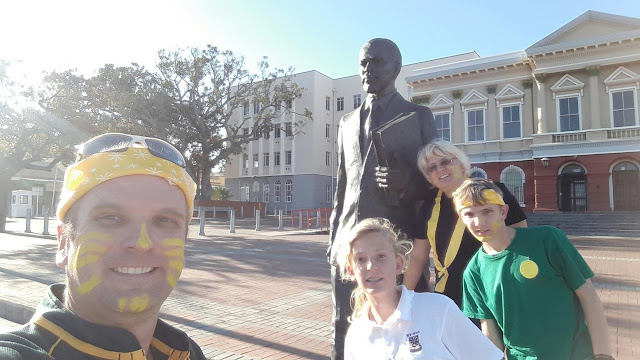 A few weeks ago we took part in the NG Kerk Uitenhage Oos’ Amazing Race around Uitenhage.  One of the clues sent us to a picture of a statue which I didn’t recognise.  After asking a few people we ended up at the Market Square in front of the Uitenhage Townhall at the statue which turned out to be that of anti-apartheid activist Zola Nqini.
Nqini was the former supreme commander of Umkhonto weSizwe (MK), the then armed wing of the ANC.  He was detained a few times and also spent some time on Robben Island.  Although Nqini was from Uitenhage, he was banished to the outskirts of Queenstown when he was released from prison.  He was later killed by SA Defence Force special forces operatives during an attack on ANC houses in Maseru, Lesotho along with 29 South Africans and 12 Lesotho nationals. The statue was unveiled in December 2015, on the 33rd anniversary of his death.
Tags: Uitenhage

Going on an Adventure Drive in the Gamtoos Valley