I couldn’t remember when last I saw a chameleon when I saw this little guy. Taken a little while ago, I was on a drive through the Kragga Kamma Game Park just outside Port Elizabeth when my eye caught a slight movement on the road (well, more like a two track path). I stopped and there it was, slowly making his way across the road. I didn’t want somebody to drive over him, so I made sure there were no animals close to us and I jumped out of the vehicle and picked him up and moved him to a branch on the side of the road. I remember a time when I was small when we often saw them where we lived. Pity their habitat is slowly disappearing like this. 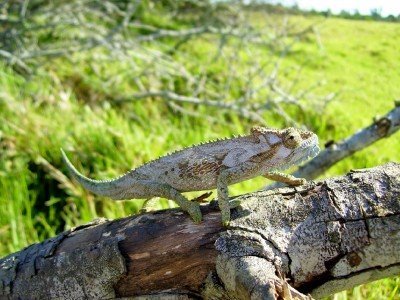 The Southern Dwarf Chameleon is part of the species of Bradypodion, meaning “slow-footed”. It is one of six genera of chameleons within the “true” or “typical” chameleons. Bradypodion (of which there are various sub species) is native to southern Africa, and are sometimes collectively called South African dwarf chameleons. The Southern Dwarf Chameleon is found in the Eastern Cape province from the coast into the drier Karoo.