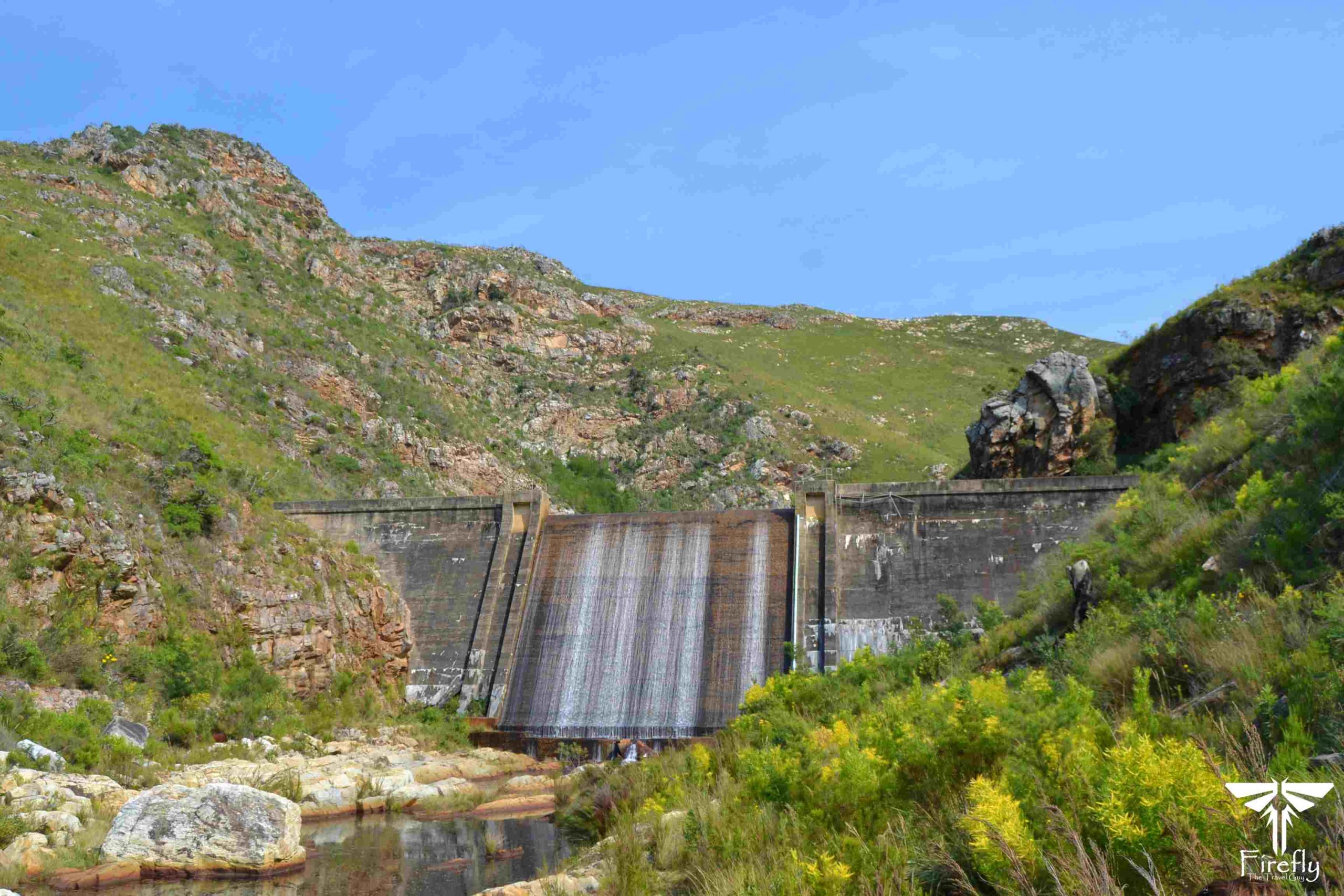 The history of Port Elizabeth’s water supply starts way back when Frames Reservoir was built on the Shark River in present-day Happy Valley back in 1864. As the demand for water increased, the need for a bigger dam was identified and the Van Stadens Water Scheme was initiated. I’m always amazed how people say there is nothing to do in Port Elizabeth and how everything is too expensive. Did you know that you can take a short hike to see the first dam built in this scheme and that it won’t cost you anything? I bet most locals don’t even know that it exists. It’s exactly what I took my family to do.

To get there you take the N2 west out of Port Elizabeth, turn off on the Van Stadens Pass / Uitenhage offramp, turn towards Uitenhage before heading left onto the Falcon Rock dirt road. Keep on to the end of the road and park by the gate. From here you can reach both the Van Stadens Railway Bridge as well as the Lower Van Stadens Dam on foot.

After a short walk along the dirt road with the railway bridge visible on the left-hand side, the path descends steeply into the gorge on a cement road. The first thing I realised as we started going down was that what goes down will have to come back up and it was going to be a duzi. At the bottom, after a quick bit of rock hopping, we got to a weir with a small dam behind it.

The walk from the small dam onwards is fairly easy and at one point there is a split in the trail either taking you into the valley or up towards the ridge. We took the more visible path up the hill and even though we got a nice view of the dam a few hundred meters later, we realised that it was a different trail that wasn’t going to take us to the dam itself. Backtracked and headed up the valley instead with the dam waiting for us about a kilometer away. Actually much bigger than I originally thought it would be.

The Lower Van Stadens Dam was the first in the Van Stadens Water Scheme to be completed and 1 September 1880 saw the first water from the Lower Van Stadens Dam flow to Market Square. It was followed by the Upper Van Stadens Dam in November 1893 and by 1907 both the Bulk and Sand River dams also started to supply water to the town. It was at that time that the St. George’s Park service reservoir was brought into commission with the ceremonial opening also being the unveiling of the Prince Alfred’s Guards memorial.

The walk up the valley brought us to the bottom of the dam that still supplies a very small percentage of water to the city today. It may not be the biggest dam around, but one still stands in awe when you’re at the bottom of the dam wall. Especially seeing that it was built in late 1800’s already. Getting to the top of the wall is another adventure on its own. There isn’t a ladder or normal steps up to the top. You need to scramble up these giant steps on the side of the dam but getting to the top is really worth it.

It was nice to see that the dam was full and overflowing. On a hot day, I’m sure it would be quite refreshing to hop into the water to cool down and then picnic on top of the wall while enjoying the view from up there. Just a word of caution, there are no safety rails at the top of the dam so never let your guard down.

The outing to the Lower Van Stadens Dam doesn’t take hours and hours so can easily be done early morning or in the afternoon. A nice little add-on would be to climb the mountain close to the start of the walk to go and see the remains of the Anglo Boer War fort built by the British to defend the water source. Something that’s still on my “to do” list along with going to visit the Upper Van Stadens, Bulk River and Sand River dams.

Penguins and dolphins at St Croix