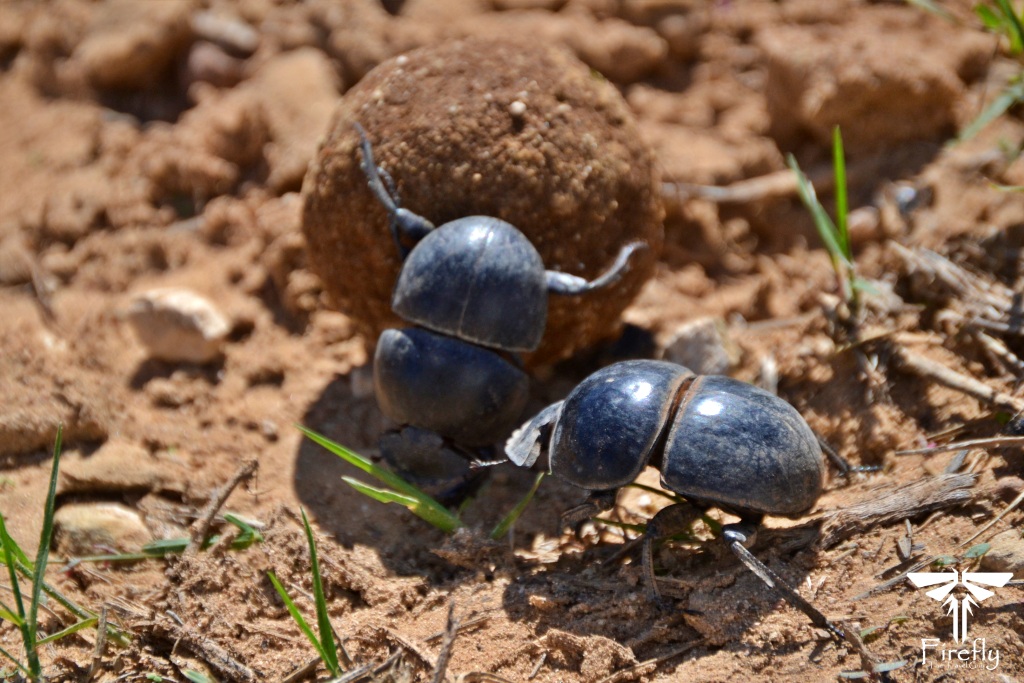 Driving around Addo Elephant National Park one tends to keep an eye on the bush and the distance fields. If you heed the warning signs close to the gate though you will also keep one eye on the road as well. You may just spot, and safely avoid driving over, one of the park’s endangered residents. The Flightless Dung Beetle. I recently took the Addo Heights access road between Addo and Nanaga and spotted quite a few of these guys on the road. As luck would have it, I noticed two busy making their way across with a dung ball and grabbed my camera. No, I didn’t get out. I could actually take these pictures from the car window.

There are over 780 species of dung beetle in Southern Africa. The flightless dung beetle (Circellium bacchus) is quite a rare specie and endemic to a few areas in Southern Africa with the Addo Elephant National Park in the Eastern Cape having the biggest population. They are unique as they don’t have any wings and mostly feed on elephant or buffalo dung. This is also one of the reasons they are classified as vulnerable. When the elephants were shot out in the late 1800s and early 1900s, they couldn’t just take flight and look for alternative places where elephants were located. As opposed to wings, flightless dung beetles have a tightly sealed elytra (wing case), which creates a convective cooling system where heat is drawn away from their body. Thus, they are perfectly suited to hot regions.

The flightless dung beetle feeds on elephant, buffalo as well as rhino dung. The dung serves many purposes for these beetles which include a source of nourishment, an ideal den for breeding, and a gift to lure in a female. I actually wondered if the latter wasn’t the case with these two as the one kept on rolling with the other following. Perhaps love was in the air.