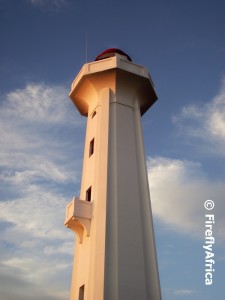 The old Hill Lighthouse, also known as the Donkin Lighthouse on the Donkin Reserve in Port Elizabeth.  The lighthouse was built in 1861 but was taken out of commission in the mid 1900’s due to the fact that the lights of the city behind it made it impossible for ships to spot it’s light.  A new light was erected out on the North End coastline to warn ships.
Visit Skywatch for more pictures featuring the sky
Tags: donkin, lighthouse, sky watch

Nelson Mandela Bay from the air