Skip to content
The Khoisan people were the original inhabitants of much of southern Africa. Having had a relatively lighter skin color than most black Africans, evidence shows that they lived in the area long before the Black people moving down the east and west coasts of Africa arrived in the south or European colonization. 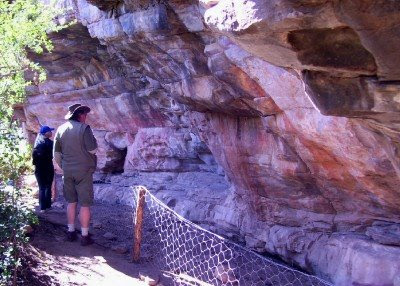 The Khoisan people are divided into two cultures. The hunter gatherer San (commonly known as Bushmen) and the pastoral Khoi (sometimes known as Hottentots). The San was found more to the north of South Africa, Namibia and Botswana where it is drier, while the Khoi lived in the south were there is a higher rainfall and thus more grazing areas for their cattle. Today the last of the San people can be found in the Kalahari (north western South Africa and southern Namibia), while the descendants of the Khoi can be found amongst the Coloured people of South Africa. 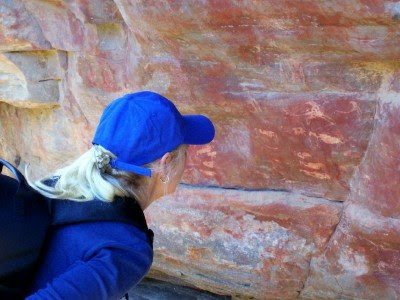 All over South Africa there is evidence of Khoisan people living in cave openings and under overhangs. In most of these locations people have found arrow heads, pottery shards, stone tools, beads and most evidently, cave paintings. 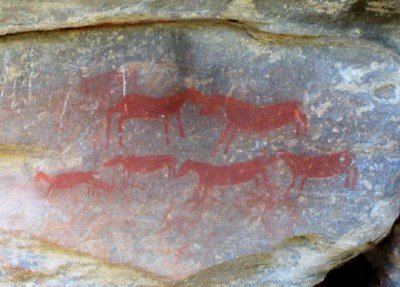 Most of these cave paintings are done of animals and people. All kinds of animals have been identified in these paintings, but most of them are antelope like eland. In some paintings hunters can be seen hunting with spears and bow and arrows.

These picture were taken on a farm outside the town of Alicedale about an hour east of Port Elizabeth. We were taken through the bush into and up a valley before getting to the overhang. The site isn’t open to the public, but there are many public cave painting sites in the Western Cape, Eastern Cape and the Drakensberg.

The Constitutional Court and the Joburg skyline