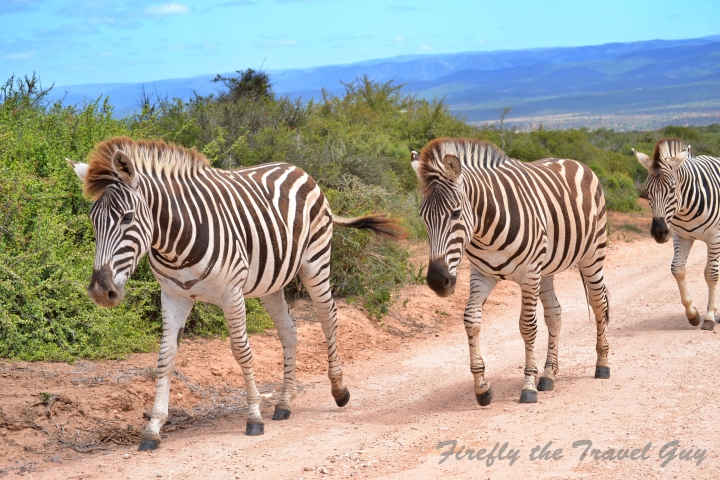 The age old question about zebra that every tourist guide asks his guests when driving through Addo Elephant National Park. Is a zebra white with black stripes or black with white stripes? Today I want to share with you some “Did you know?” facts about these donkeys in pajamas.

Addo’s zebra are Burchell’s zebra (Equus quagga burchellii) and is a southern subspecies of the plains zebra. It is named after the British explorer and naturalist William John Burchell.

Zebra stripe patterns are unique to each individual and are believed to help camouflage the zebras from prey.

Zebras are herbivores and primarily eat grass. They are also known to eat shrubs, herbs, twigs, leaves and bark.

Zebras communicate with one another in several ways. Facial expressions, such as wide-open eyes or bared teeth, all mean something. They also bark, bray, snort or huff to get their point across. Even the position of their ears can signal their feelings.

Zebras sleep standing up and only when they are in groups  that can warn them of danger. If they spot a predator, they will bark or whinny loudly to warn the others in the group.

The zebra’s biggest threats are habitat loss due to farming and competition for water with livestock. They are also hunted for their skins. Zebra predators include lions, leopards, cheetahs and hyenas.

Zebra foals are born with brown and white stripes as opposed to black and white stripes. Mares generally keep away from all other zebras for 2-3 days until her foal recognizes her by sight, voice and smell.

Female zebras carry their young for a gestation period of 12 to 14 months. When they are born, foals weigh around 25 to 40 kg (55 to 88 pounds). Soon after birth, foals are able to stand up and walk.

The young zebra gets its nutrition from its mother’s milk and will continue to nurse throughout its first year.

Zebras become fully mature at 3 to 6 years old and will have a lifespan of around 25 years.