When the Dutch came to the Cape and started exploring the Southern tip of Africa, they discovered all these magnificent animals in abundance. The found a rhino which the called a “Wydmond renoster” which is translated to “Wide mouth rhino”. When the British came to the Cape they heard what the Dutch called the animal and thought it was White rhino. When they found a rhino that looked differently, they just assumed that if the one is a White rhino, the other must be a Black rhino. 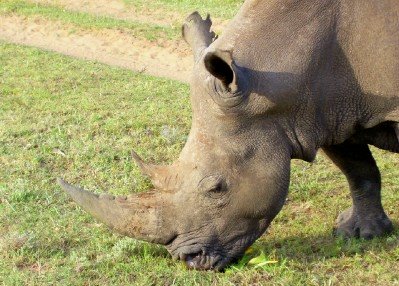 The White rhino is bigger than the Black rhino, is found on open plains and is a grazer, while the Black rhino is more aggressive, live in the bush and is a browser. The White rhino, as a grazer, is more hunched over as it eats from the ground. Its lips are wide (hence the original name) so that it can grip more grass at a time while the black rhino is more upright, has a pointed upper lip and jaw for browsing. 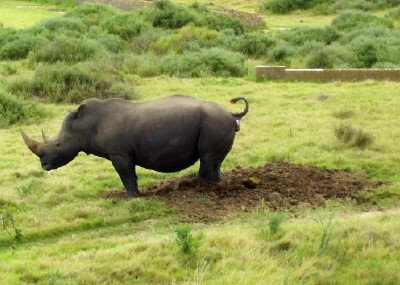 A rhino will always go back to the same place to do his thing. You will find dung middens all over a rhino’s range. It’s part of the way he marks his territory.

An interesting fact bout rhino and their young is that the White rhino lets her baby run in front of her while a Black rhino lets her baby run behind. That’s because in an open field the White rhino is running away from danger so she protects the baby from behind, while a mother Black rhino is leading the way through the bush and will protect her baby in case there is something lying waiting. Now how to remember this? Please don’t accuse me of stereotyping, racism or anything else that’s nasty but here is the easy way. Traditionally a black woman in Africa will carry her baby tied to her back with a blanket while an European (white) woman will push her baby in front in a pram. Ok, so modern black women also push their babies in prams, but its just a way for the layman to remember the fact. But let me stop before I get thrown with a high heel shoe or a sandal.