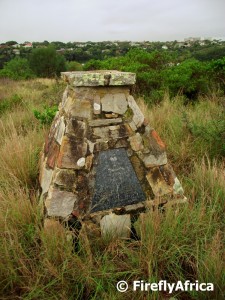 One of the things I’ve discovered since I’ve taken up geocaching is that even though I thought I knew everything there is to see in and around Port Elizabeth, I haven’t.  I’ve already been to at least three spots I’ve never visited before and I have another two new places lined up.  One of those I haven’t seen before was a corner of Settlers Park called Wellington Park which is quite popular for a short walk with the residents living in the area.  Along the trail I found a little monument which was erected in the mid 1900’s to remember the landing of Jan van Riebeeck in the Cape in 1652 and the British Settlers in Port Elizabeth in 1820.  If it wasn’t for geocaching I would never have known that this is there.
Tags: monument, Parks, Settlers Park, walmer

Then and Now – Target Kloof