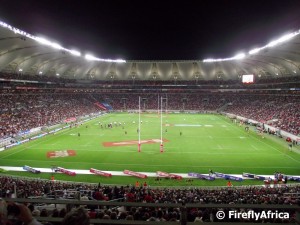 The Southern Kings are back in town after their four match New Zealand and Australia Super Rugby away leg and on Saturday (20 April) evening takes on the three time champions Bulls in front of a sell out Nelson Mandela Bay Stadium.  The picture was taken at their second home game against the Sharks which was also in front a sell out crowd.
Tags: night, sport, world cup soccer stadium