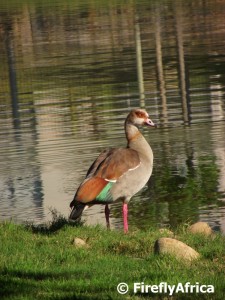 Egyptian Geese are generally very territorial so once a pair finds a home they will very much stick around.  This means that young birds have to find their own “unused water holes” which isn’t always that freely available.  I know of some that even made a dogless backyard with a swimming pool their home.  It was great to see that a pair of Egyptian Geese quickly made their move in at the lake at the new Kings Beach development.  Always great to see wildlife in urban areas.
The Egyptian Goose (Alopochen aegyptiacus) is a member of the duck, goose, and swan family Anatidae. It is native to Africa south of the Sahara and the Nile Valley.  Egyptian Geese were considered sacred by the ancient Egyptians, and appeared in much of their artwork. They have been raised for food and extensively bred in parts of Africa since they were domesticated by the ancient Egyptians.
Tags: birds, kings beach