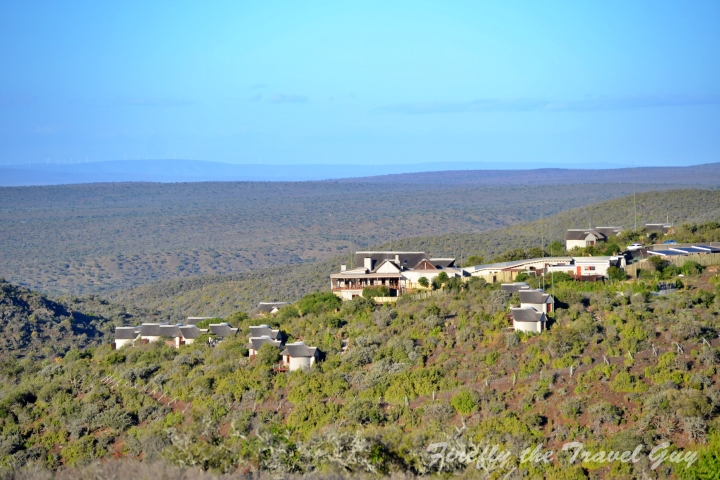 Over the Zuurberg mountains in the southern part of the Eastern Cape’s Karoo Heartland lies a place of glory. That bit should actually be written with caps as Kuzuko Lodge‘s slogan is Place of Glory. Most game reserves are located in a part of the province where lush subtropical thicket vegetation is prevalent which makes Kuzuko different. Wide-open spaces, sparse vegetation, dry climate and often warmer temperatures. Due to this Kuzuko doesn’t have big numbers of animals like the other reserves, but it doesn’t mean that game sightings aren’t good. In some instances, it’s actually better.

I got to stay two nights at Kuzuko with the family as part of a promotional video shoot they were doing so we didn’t get to do all the “traditional” game reserve and lodge visit things, but we did get to go on two game drives and I just can’t but help to show off some of the superb sightings we had during our stay.

The highlight at Kuzuko is definitely finding the lions, mainly because one of them is Sylvester the lion who famously escaped from the Karoo National Park on two occasions. The pride of four is made up of Sylvester, Fielies and two females, and we found them stuffed and relaxing in the shade after an earlier kill. Although the boys were having a good ol’ sleep, one of the girls was surveying her surroundings and I did get a killer yawn photo.

Elephants are always awesome to see and at Kuzuko it was no different. We saw them on a couple of occasions over the weekend but I really loved the sighting we had of Saracen, their big dominant bull, all on his own just after sunset with the karoo plains stretching out behind him. I also enjoyed seeing the family herd move across the hill next to the lodge on their way down to the waterhole.

Even though the Cape Buffalo is perhaps the most dangerous to humans among the big five because they are very protective and territorial and when threatened they are known to charge with astonishing speed, they are probably also the one visitors are the least excited to see. I always enjoy spotting buffalo, especially if there is an old dagga bull with a good set of horns around. The herd we found didn’t have any old bulls, but it did have a couple of cute young calves showing off their superior cuteness.

My personal highlight was coming across a female cheetah who had taken down a warthog about the same size as herself. We probably missed the kill by no more than half an hour and could see how far she dragged it to get to a shady spot. What makes this sighting so much more extraordinary is the fact that she came from captivity and was rewilded at Kuzuko where she had to learn to hunt for herself. She’s definitely not doing too badly.

The nice part of Kuzuko is that you never know what to expect next. At most reserves the rangers often know exactly what will be waiting where, but at Kuzuko anything is possible. It could be zebra camouflaged behind sweet thorn trees, giraffe sticking its head out from behind a bush to look down on you, impala and eland on the plains, kudu hiding in the shrubs with only his horns finally giving him away or one of the many different bird species on the reserve.

I think I’m actually wrong because when you go there you do know what to expect. A place of glory.