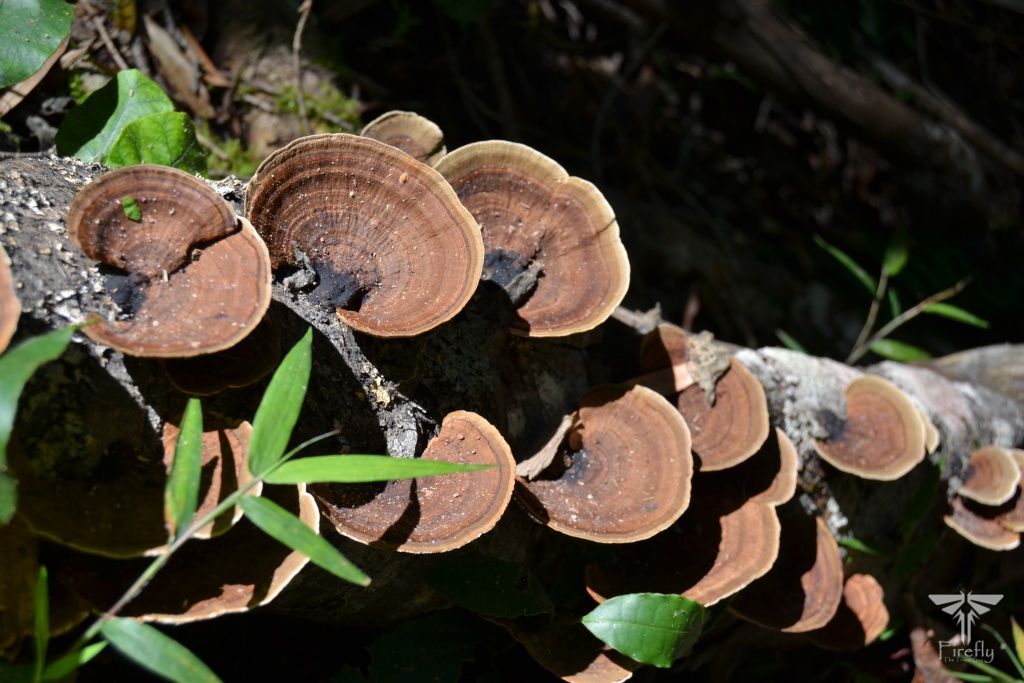 The Big Tree is one of the Tsitsikamma’s most iconic attractions. To get to this 1000-year-old Outeniqua Yellowwood tree you have to walk about 500 meters through the forest on a wooden boardwalk. It takes you less than 10 minutes to get to the tree. Unless you’re there on a quiet day with no other visitors around and you keep an eye out for interesting little tidbits next to the path. I did just that on my last visit, with my camera at the ready, and amongst others spotted at least six different types of mushrooms and fungi on my last visit.

Finding names for the mushrooms and fungi wasn’t that easy, but I made use of the Google Lens app on my phone and came up with these.

These could possibly be Brown Black Eyed Bracket Fungi. The bracket fungus, also called shelf fungus, are commonly found growing on trees or fallen logs in damp woodlands. They play a very significant role in nutrient cycling and carbon dioxide production of forest ecosystems but can also severely damage cut lumber and stands of timber.

Lens tells me that this is a Turkeytail. Apparently, this fungus is used in Chinese herbal medicine to boost the immune system and for its anti-tumor properties.

According to Wikipedia a mushroom or toadstool is the fleshy, spore-bearing fruiting body of a fungus, typically produced above ground, on soil, or on its food source. The standard for the name “mushroom” is the cultivated white button mushroom, hence the word “mushroom” is most often applied to those fungi that have a stem (stipe), a cap (pileus), and gills (lamellae, sing. lamella) on the underside of the cap.

When you see mushrooms like these you keep expecting to see pixies, fairies of pipe smoking caterpillars to appear on or from under them. All part of the magic of the indigenous forest.

This specific bracket looks and feels like a piece of wood but I haven’t really been able to find a name for it. Definitely been around for a while if it has become this hard already. When you see a bracket fungus on a tree it’s likely to have been at work inside the tree for some time before it has developed enough energy to create a fungal bracket or the fruiting body.

Searching around the intermet, the bracket fungi with a dark top and white underbelly are often referred to as Artist’s Fungus. The underside is creamy white and can be scratched with a sharp point to leave brown marks and so produce artistic images – hence the common name.

As you can see I’m no mushroom and fungi expert. Clearly not by a long shot. If you do know a little more than I do then please let me know and I will happily edit the post to the correct names.