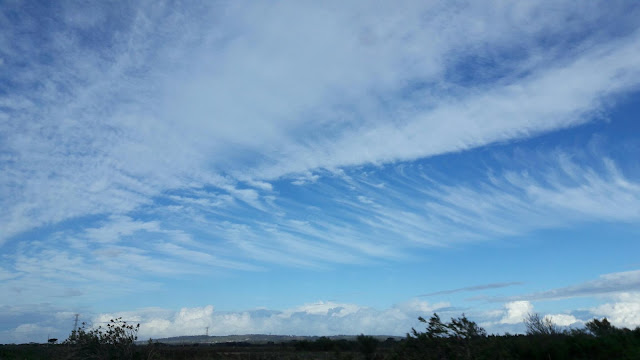 I know I usually post a video from YouTube on Fridays, but today I want to post a picture I took on  y way back to PE from the Tsitsikamma.  Just outside Port Elizabeth I noticed a very interesting cloud formation and snapped a quick photo.  Not long after a friend posted a picture of the same clouds he took from the Donkin on Facebook.  One of the people who commented on it gave an explanation on what it was.  The clouds are Cirrus Clouds which is the most common form of high-level clouds. Typically found at heights greater than 6,000 meters, cirrus clouds are composed of ice crystals that originate from the freezing of super cooled water droplets.  The reason they were making these lines which made it look like the clouds were “leaking out” is wind sheer most likely caused by an approaching cold front pushing the air forward in front of it.  Interesting, isn’t it?
Tags: weather