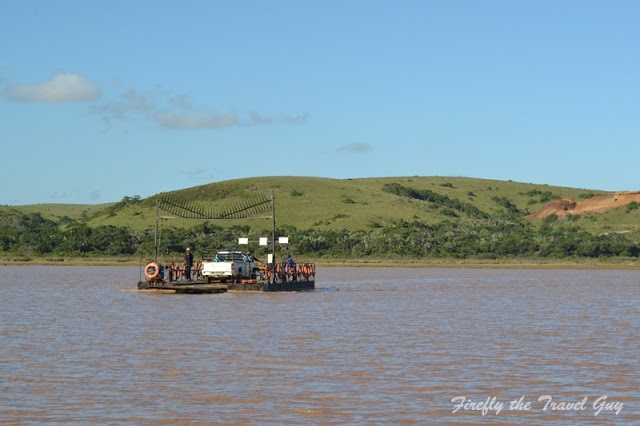 Crossing the Great Kei River by pont into what used to be the old Transkei has always been on my South African bucket list. That was until I got to do it about 6 years or so ago.  Since then I’ve had the opportunity to do it a couple of times and I always look forward to it.  It’s nothing fancy or out of this world, but it is special because there are so few ponts left in South Africa. In fact, the only other two in South Africa that I know of is the one at Malgas over the Breede River in the Western Cape and the one at Sendelingsdrift crossing the Orange River into Namibia.

The Pont began operation as a vehicle transport in it’s current form in 1990 and has become a vital lifeline for the communities living in the Centane area. Before the Pont, it was either a dice with death in a rowing boat or a 154km round trip via Butterworth, just to get a few hundred meters to the other side. In fact, travelers getting to the crossing point too late on their way to their holiday destination often have to do the detour to get to their hotel for the evening.

The Pont is in operation seven days a week, 365 days a year. They only close when the river is in flood or the tide too low. There is usually only one Pont in operation at a time, but during holidays there would be two, or sometimes three, in action. Each Pont can carry two vehicles at a time and the first crossing of the day is made at 7am, when people from the Transkei side make their way across to work in Kei Mouth.

Update: I asked the members of the Wild Coast Holiday Association if they had any information on the ferry’s history and I received the following:

Sonny Taylor used to row people across the river before the pont, as we know it today, existed.

Russell Kruger from East London – “My dad used to run the ferry until 1977 or there abouts . There was no pont in those days and the crossing was first with a rowing boat then he got two boats with Seagull motors.”

Richard Warren-Smith from Morgan Bay – “I remember before the red ferry got a motor and the guys rowed across with a full ferry of Black Label quarts. Back when we were at the little school above the municipality. Between 72 and 80.”

Andrew Baisley (one of the original partners in the first pont) – “I moved to Kei Mouth permanently in 1981 and at that stage the only way across the Kei was by rowboat. After a few years, the business community came together and purchased this red boat to replace the rowboat.”

Graham Roebert, Andrew Baisley and Peter Myburg went into partnership and launched the first pont in March 1990. The pont from 1990 is no longer in service today. It has been replaced by newer models over the years, the most recent one having been launched in Dec 2020. There are currently 3 ponts.

Julie-Anne Gower of Kei Mouth – “We use to drive down the beach from Trennerys/Seagulls with the Hulley’s landie, and off road to the top of the hill. Park at the top of the hill and then wade through the muddy salt flats to the boat. We would then walk through to the Kei Beach hotel and the shop to pick up the paper and get the Matric results for the kids that were staying at the hotels over the holidays. Then reverse the process going home. When my hubbie and I were dating in around 93/94 we went over on the ferry, and it was just a rough 4×4 track – that has now become the tar road. It was a bundu bash of note “

De Toren on the way to Nieu-Bethesda