Skip to content
Yesterday I told you about Prickly Pears and in this case the red prickly pear. I also mentioned that the cochineal beetle was introduced as the prickly pear’s natural enemy to stem the spreading of the plant. Cochineal beetles are best know for the fact that they are used to create a natural red dye. The information below I got off Wikipedia. 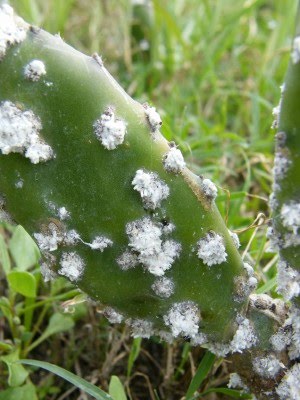 Cochineal insects are soft-bodied, flat, oval-shaped scale insects. The females, wingless and about 5 millimetres (0.20 in) long, cluster on cactus pads. They penetrate the cactus with their beak-like mouthparts and feed on its juices, remaining immobile. After mating, the fertilized female increases in size and gives birth to tiny nymphs. The nymphs secrete a waxy white substance over their bodies for protection from water and excessive sun. This substance makes the cochineal insect appear white or grey from the outside, though the body of the insect and its nymphs produces the red pigment, which makes the insides of the insect look dark purple. Adult males can be distinguished from females by their diminutive size and their wings.
It is in the nymph stage (also called the crawler stage) that the cochineal disperses. The juveniles move to a feeding spot and produce long wax filaments. Later they move to the edge of the cactus pad where the wind catches the wax filaments and carries the cochineals to a new host. These individuals establish feeding sites on the new host and produce a new generation of cochineals. Male nymphs feed on the cactus until they reach sexual maturity; when they mature they cannot feed at all and live only long enough to fertilize the eggs. They are therefore seldom observed. 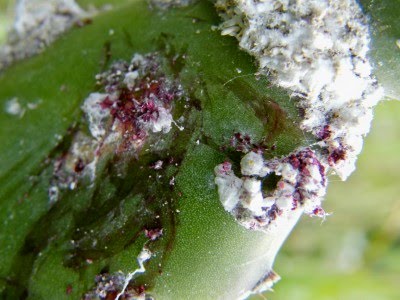 Here I have crushed the cochineal to show the red colouring
Tags: insects, plants

A couple of long necks