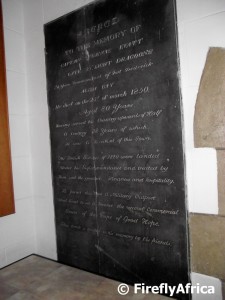 Captain Francis Evatt who was commander of Fort Frederick from 1817 – 1847 and amongst others oversaw the landing of the 1820 British Settlers was buried in St Mary’s Cathedral after his death.  His remains were moved to a grave just outside the north wall of Fort Frederick in 1956.  With the moving of his remains to the new grave it was decided to put a replica tomb stone on the grave while the original tomb stone was installed in the cathedral’s foyer.
Tags: churches, city centre, history