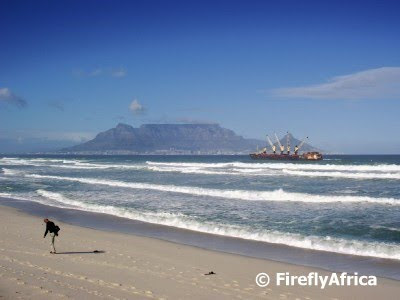 Lying just off the beach at Bloubergstrand in Cape Town for the last year or so is the wreck of the Turkish ship Seli 1. The Seli 1 apparently dropped anchor in Table Bay when the anchor broke off in large swells. The ship drifted towards shore and landed on a sandbank before being pushed onto rocks which punctured a hole in the side of the boat. Fortunately it didn’t cause any pollution along the coastline.

Authorities have been unable to refloat the boat due to the damage caused. The cargo and oil has been removed and the ship will now be cut up as scrap metal. So for now it has become part of the Cape landscape and photographers’ subject.