Skip to content
Yesterday I said that I will do a couple of posts about the 1820 British Settlers, so here is part 1. I will keep the info short, because if I have to get my teeth into it, I will go on and on.
Before 1820, Port Elizabeth was the eastern end of the Cape Colony. To the east lived the indigenous black people of the area, namely the Xhosa. The colonial government got worried that they may attack the colony and decided to colonize the area and push the Xhosa back. About 6000 British Settlers arrived on our shores in April 1820. They were first housed in tents on the beach before being loaded, with all their possessions, onto ox wagons for the long journey to the farms allocated to them. Today the 120km journey from PE to Grahamstown and area takes about 80 minutes. In those days with only a track to follow through the bush, it took 6 – 10 days of hard slog. 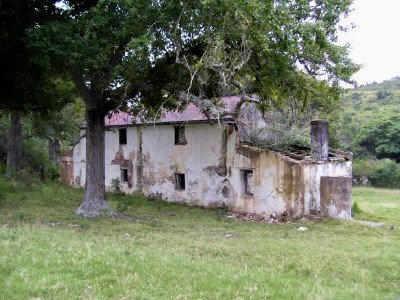 The old ox wagon trail can still be seen in some area. There are also still evidence of some of the old inns and buildings that were built along the route. This was one of the inns along the way and is situated on the Kwantu Private Game Reserve. The inns did not exist in the very early day, but was developed in the years that followed as traffic along the route increased. 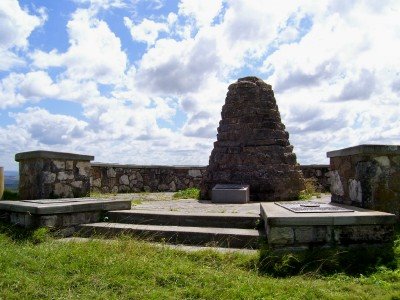 The village of Bathurst is situated about 70 south east of Grahamstown. The photo above is the Toposcope. From this spot the settling of the Settlers were overseen. Bathurst was supposed to become the main town of the area, but Grahamstown was selected. This meant that Bathurst never developed much and is still a very small country village. The Toposcope is a monument that points out a big number of the original Settler farms. 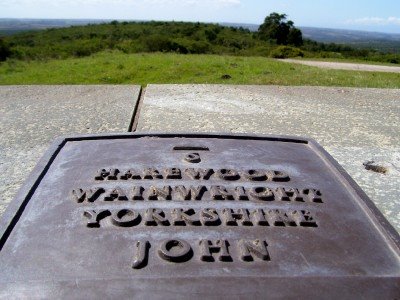 Along the circular wall of the Toposcope is a number of plaques pointing out the original farms. Each plaque has the following information (from the top):
An arrow pointing out the direction, the distance from this point to the farm in miles, the name of the farm, the surname of the leader of the specific group, the county where they came from in Britain and the name of the boat they came on.
More on Bathurst tomorrow.
Tags: Bathurst, Eastern Cape, Frontier Country