Skip to content
In today’s modern day people traveling between Port Elizabeth and Cradock crosses over the Zuurberg Mountains at speed via the Olifants Kop Pass (R32). In olden days travellers had to cross over the old Zuurberg Pass which was quite a treacherous journey. The Zuurberg Pass is still accessible today although its mostly a very bumpy dirt road. In the past I have travelled up to the Zuurberg Inn several times, but I’ve never been over the pass’ back and down the other side. 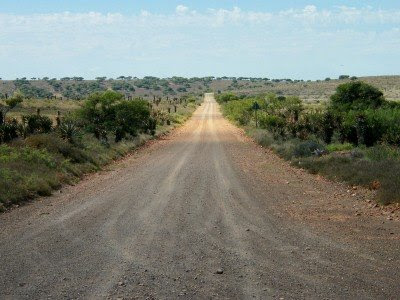 The ideal opportunity to explore the whole pass came my way when we got to go to Addo Elephant Back Safaris which is situated in a valley at the top of the mountain. I decided to attempt it from the inland side and exit on the Addo Elephant National Park side which is the side I’m familiar with. We started out on the Jansenville dirt road (R400) linking the Cradock road (R32) with the Graaff Reinet road (R75). All started well with a straight and smooth dirt road which was a pleasure to drive along. 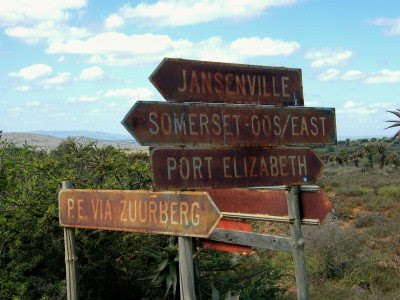 At one of the intersections close to the historic Ann’s Villa we found this sign. I just had to stop to take a picture. It also told me that the road has been around for a while and I could start to hear the ghosts of ox wagons grinding along the dirt road heading north. But we were heading south and there were thunder in the air … or was it just my stomach grumbling. 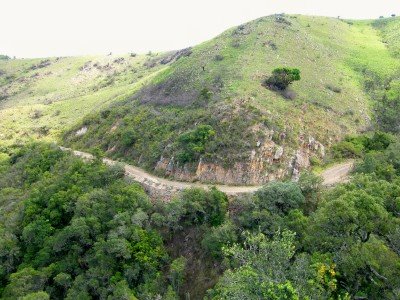 It wasn’t long before the road started to get narrower and a lot more bumpy and rocky. It was winding its way up and down the mountain like a hungry python trying to choke its prey. But the scenery made up for the fact that if I had dentures I would have had to pick it up from the floor. 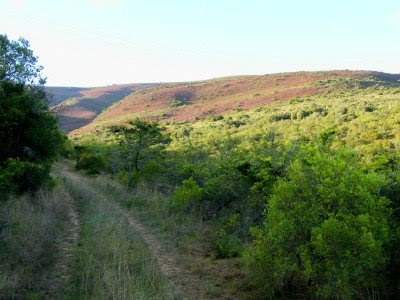 The mountain side was covered in a blanket of heather. Like somebody took a pink quilt and draped it over the Zuurberg. It was absolutely awesome. Heather forms part of the Fynbos biome or Cape Floral Kingdom, the smallest of the world’s six floral kingdoms. The Cape Floral Kingdom was proclaimed an UNESCO World Heritage natural Site which means that fynbos is highly protected by law. 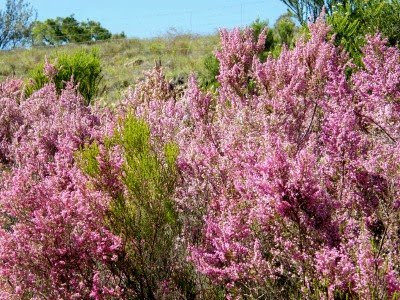 As much as the Damselfly wanted to stop and pick some to take home for the lounge I wasn’t prepared to take that chance of the flower police sitting somewhere watching me. Specially not within the Greater Addo Elephant National Park At the end of the winding road we got to our destination for the night and after the next mornings elephant ride and activities we went on up the mountain again, still heading south. After some more rattling we got to the historic Zuurberg Inn which seems to be going up full steam ahead after last years big devastating fire. From there its smooth sailing down the mountain side before hitting the tar road again near the National Park’s main gate on the R335. A trip to be recommended if you like mountains, passes and fantastic natural scenery.

The longest surfski wave in the world