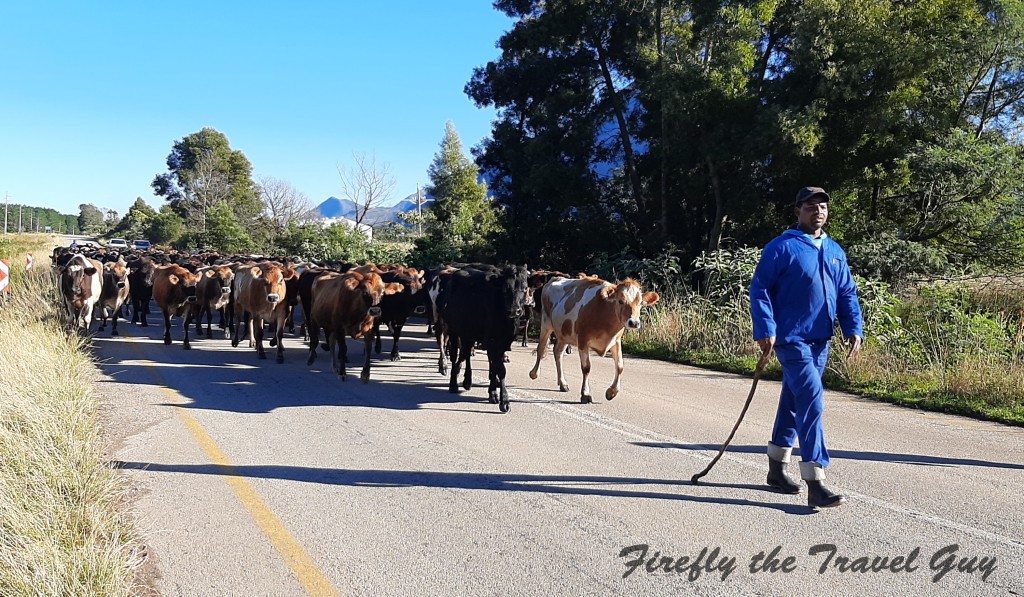 We decided to break away to the Tsitsikamma for the day and rather than just driving in and out on the N2, we took the scenic R102. The three biggest industries in the area are forestry, tourism and dairy so everywhere along the way you pass plantations, dairy farms and accommodation and activity establishments. What we didn’t expect to encounter was a roadblock made up of cattle. As we crested a little hill I realised that there was something in the road about a kilometers ahead. And not something like a car or a person, but a lot of somethings. A herd of cows being moved down the road from one farm to another with the herdsman in front leading the way.

Rather than just sitting in the car I pulled over and we all hopped out to experience something that is very unusual for city slickers like us, being surrounded by a herd of cows in transit.

Being an 18 year old teenager, Chaos Boy didn’t really show any interest, but Miggie was a lot more excited and inquisitive about the whole thing.

We barely got going when the next herd appeared in the road. This one was moving a little faster with the two guys in the lead breaking out in a jog every now and then with the cows nipping at their heals.

This is what road trips and exploring on country roads is about. Experiences that you wouldn’t get anywhere else.

Going on a game drive at Kuzuko Lodge