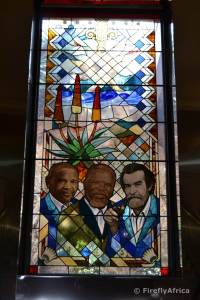 One of the new additions to the newly revamped Port Elizabeth Opera House is a stained glass window featuring the only three Africans on the continent to win the prestigious Tony Award – John Kani, Winston Ntshona and Athol Fugard.  And best of all, they’re all from our city.
Forty years ago, the trio were nominated for the best play Tony Award, for their co-written play The Island.  Kani and Ntshona both walked away with best actor awards for The Island and Sizwe Banzi is Dead while Fugard was later awarded a Lifetime Tony in 2011 for his contribution to theatre.  Now the three legends are honoured and immortalised for their contribution to the arts through this magnificent stained glass window by David Manning at the top of the grand staircase in the foyer of the complex.
Tags: artwork, Opera House, theatres