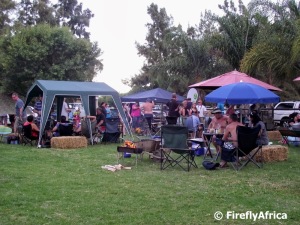 In South Africa a braai (and please note how I say braai and not barbecue as barbecue is a chips flavour) is as part of the nation’s heritage as ice is part of the North Pole.  In my opinion a braai is also just a proper braai when you start with burning wood to create coals.  But that is a discussion for a whole other day.  Something that is very much part of the braai culture is potjiekos.  Potjiekos literally translates as “small pot food” and is a stew prepared outdoors and traditionally cooked in a round, three-legged cast iron pot. 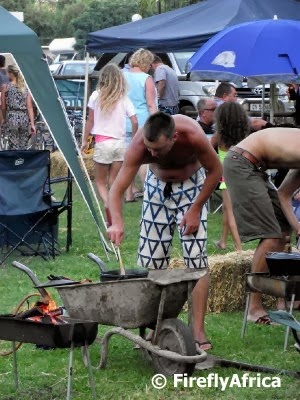 When the Dutch first came to the Cape they brought with them their ways of cooking food in heavy cast iron pots. These pots would hang from the kitchen hearth above the fire and was used to cook and heat water. The black people of South Africa also used cast iron pots to cook in, something they learned from Middle Eastern traders and later Portuguese colonists.

During the Great Trek in the 1800’s the Voortrekkers hung their pots from their wagons and when they got to their over night stops they would put the pots straight onto the fire to cook or heat their food in. The beauty of cast iron pots is that they are able to retain heat well and only a few coals are needed to keep the food simmering for hours as the heat and steam doesn’t escape from the lid. 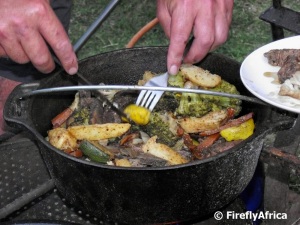 The most popular pot to use is the no 3 pot which makes enough for about 4 to 6 people to eat from. and what you make with it is only limited by your own imagination. Let me explain why. Well, you can make just about anything in the pot. I normally have a small pot on the side in which I make chicken livers while another favorite is making pot bread to eat with the potjiekos. The potjiekos itself range from meat potjies to vegetable, seafood to chicken and pasta to desserts.

The way to make your potjiekos is to start off with some oil in the bottom of your pot.  Remember how Shrek said that ogres have layers like onions? Well, potjiekos is also made up of layers.  You start off with your meat in the bottom of the pot, browning it on both side to seal in the flavour.  Cook the meat for a little while longer and then add the onions followed by the vegetables which get placed in the order it takes them to be cooked.  Start off with potato and carrots followed by pumpkin, mushroom, peas and tomatoes right at the top.  This is obviously just a suggestion as you add whatever tickles your fancy.  Some people add their sauce or wine straight after their meat.  I like to add mine after the veg.  A watery potjie is never good so don’t add to much water.  Importantly, and this is the main difference between a potjie and a stew, don’t stir until right at the end.

One of the best parts of being at a potjiekos competition is taking a walk around past the competitiors to see what they are preparing and to get some ideas for your own future creations.  The competition in question was at the Montagu Caravan Park in the Western Cape and there were probably about 20 entries with a huge veriety of pots and side dishes on offer.
﻿
The judges really had their jobs cut out for them moving from pot to pot tasting everything, taking notes and deliberating.  Even though there were some outstanding dishes there could only be one winner. 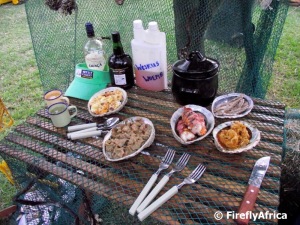 The lamb shank pot close to where I was sitting smelled and looked outstanding but eventually it had to bend the knee to a couple of guys from the West Coast with their Abelone (yes they had a permit for it) pot and it’s side dishes which included crayfish tails.  Yum yum yum…  South African cultural food at it’s best.