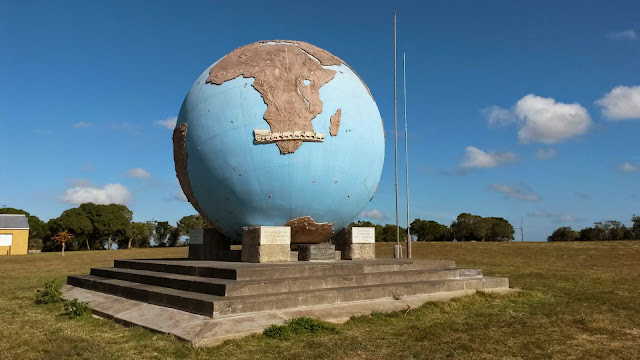 Very few people driving along the R72 coastal route between Port Elizabeth and East London have ever seen or even know of the Karel Landman monument about halfway between Nanaga and Alexandria.  The only indication that there is a monument up the dirt road is a road sign at the turnoff.  A couple of kilometers up the dirt road one stands in awe though of the magnitude of this monument in the shape of a globe.  Its huge… and kinda in the middle of nowhere. ﻿
At about the centenary of the Great Trek, the idea was initiated for a local monument to commemorate the centenary of the trek from the Eastern Cape by the Voortrekker party under leadership of Karel Landman.  Landman farmed in this area until 1837 and took a party of about 180 trekkers and their servants on a trek of 885 kilometres into Natal. He became prominent in several battles with the Zulus and was the second in command of the Boer forces at the pivotal battle of Blood River
Well known Afrikaans architect Gerard Moerdijk was approached for the design which was approved in May of 1939, although the granite plinth had been inaugurated on 16 December 1938 already.  The concrete and terrazzo monument was manufactured by the Lupini Brothers in Johannesburg at a cost of £470 (R940 back then).  The monument was unveiled later in the year on 16 December 1939 by WA Landman, a descendent of Karel Landman.
Tags: Eastern Cape, Great Trek, Instagram, monuments, Sunshine Coast

A throne with a view