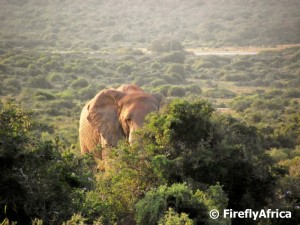 I attended the media launch of the Kirkwood Wildsfees in the Addo Elephant National Park and to end the program off we were taken on an open vehicle game drive through the park.  As is often usual in Addo we had some stunning sightings.  This guy was peeking at us from behind a bush trying to be inconspicuous.  Gives him a bit of a mysterious look, doesn’t it.
The annual Wildsfees takes place from 28 – 30 June 2013 in the town of Kirkwood about an hour from Port Elizabeth.  The festival includes the usual entertainment and stalls as well as the annual game auction in the park itself, 4×4 competition, a mohair exhibition, a smileys (sheep heads) long table banquet, wine garden, donkey cart competition and lot and lots more.  The entertainment this year includes Kurt Darren, Jay and Lianie, DJ Ossewa, Emo Adams, Juanita de Plessis and Johnny Clegg to name a few.  Its going to be an event not to be missed.
Tags: addo, animals, big 5