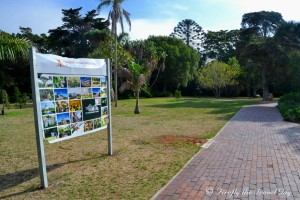 I took a walk through St George’s Park a week or so ago and along the way I wondered how many people actually know how old St George’s Park is.
St George’s Park was laid out and opened on 6 August 1861 to commemorate the visit of Prince Alfred, second son of Queen Victoria, to Port Elizabeth exactly one year earlier.
Flags and streamers were flying in every direction, all shops were shut, people dressed in holiday attire, and expectation stood on tiptoe. By a sort of instinct the Market Square (now Vuyisile Mini Square) seemed to be the centre of attraction. Here the naval brigade all dressed in blue and white stood mustered under Captain Chapman and Lieut. Wheatland. The worshipful concillors in ‘tails and gloves’ began to assemble at the Town Hall and looked most grave and dignified. Presently the band struck up and matched smartly down Main Street (now Govan Mbeki Avenue) and up Donkin Street past the Scotch Church. The concillors then proceeded to the Hill and by the time the brigade had reached the spot, a good crowd of people had assembled to witness the ceremony of planting the first tree in the newly-named St Georges Park. A fellow townsman, Mr Birt, had presented the Mayor with a young oak and this was to be the tree.
The Mayor, Mr William Smith, then explained to the assembled crowd the purpose of the meeting, after which he called upon Mr Pearson, the originator of the idea, to address those present. In brief, it was to the effect that for some time a public playground had been needed in Port Elizabeth and that the Mayor was about to plant the first tree in what it had been decided to name ‘Prince Alfred’s Grove’. In later years when people would assemble in St Georges Park they would point to the Prince’s Grove and say; ‘for that and for this spacious playground we are indebted to the foresight and kindness of a former Municipal body who commemorated the first anniversary of a Royal Prince’s visit in inaugurating for the comfort, health, and recreation of their fellow-townsmen for all time these shady walks and extensive beautifully laid-out grounds.’ After this, champagne was produced and amid a volley of popping corks and several repartees, healths innumerable were drunk, and success to St. Georges Park and to the Prince’s Grove pledged over and over again.
— Port Elizabeth in Bygone Days written by JJ Redgrave and published in 1947.
Tags: Parks, st georges park