I want to bet my bottom dollar (ok, so I’m not a betting man, is really confused with why the dollar is at the bottom and why are we talking dollars and not rands?) that you have probably never heard of the Dockside Brewery.  Located just behind the Herald in Horton Street in the Baakens Valley, the Dockside Brewery has been producing beer for just over a year and is breaking some serious ground when it comes to craft beer in the city.  They create a number of very unique beers which isn’t for anybody, but those who appreciate a proper craft beer will really enjoy it.  They don’t compromise on quality, don’t skimp on the ingredients they use and take much more time to produce a lot less beer than most other breweries.  While a lot of craft breweries can produce ales in 11 days, they take between 42 and 56 days.  They also use spring water from the Elands River Valley and not the municipal water supply.  Dockside also don’t produce their craft beer in kegs as draft but rather bottle it and also sell directly to the public. 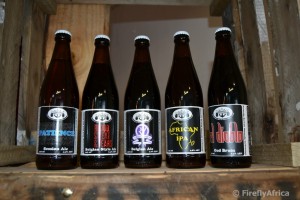 I discovered Dockside Brewery on the recent Hop on Beer Route tour I went on and got to taste their craft beers while there.  So if you’re a beer lover, do head down that way and go and check them out.
Tags: brewery