Skip to content
The big unpacking has started. We got back yesterday from our two week camping holiday and everything is out of the car and waiting to be sorted, cleaned or stored. At least I’ve downloaded all my pics. The first week was spent camping at the Gariep Dam in the center of South Africa while the second week was spent on the coast at Cannon Rocks. Most of the time at Gariep was spent next to the pool, but during the second week I got to do a lot more exploring and obviously got to take a lot more photos. This means that for the next week or so I will be sharing the places and scenes we encountered. 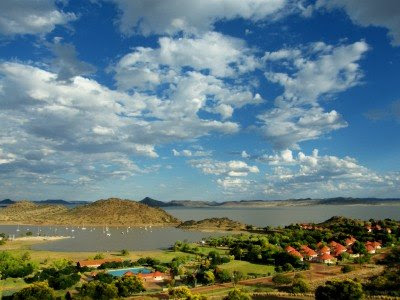 The Gariep Dam was originally called the Hendrik Verwoerd Dam after the first Prime Minister of the Republic of South Africa and was commissioned in 1971. However after the end of apartheid the name was considered unsuitable, and the name was officially changed to Gariep Dam on 4 October 1996. The word gariep comes from the Khoi San language and means “Great water”. It is also the original name of the Orange River which flows into the dam which is situated between the provinces of the Eastern Cape and Free State. We stayed at the Forever Resorts’ Gariep Dam Resort on the banks of the dam. 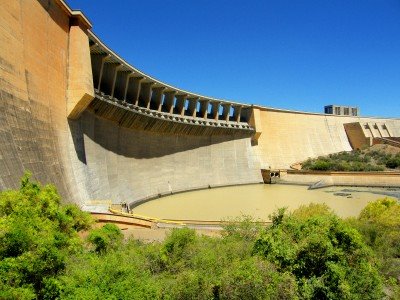 The dam itself is a concrete gravity-arch hybrid dam. This design was chosen as the gorge is too wide for a complete arch so flanking walls form gravity abutments to the central arch. It is 88 m high and has a crest length of 914 m and contains approximately 1.73 million m³ of concrete.
The Gariep Dam is the largest storage reservoir in South Africa with a total storage of approximately 5,340,000 megalitres (5,340 hm³) and a surface area of more than 370 km² when full. It has four 90 MW generators, giving a maximum output of 360 MW of electricity at a water flow rate of 800 m³/s. Ok, so I got this bit off Wikipedia but I did sound all clever, didn’t I? Along the top of the wall (the part that looks like it has support beams underneath) is a road that links the two provinces with each other. 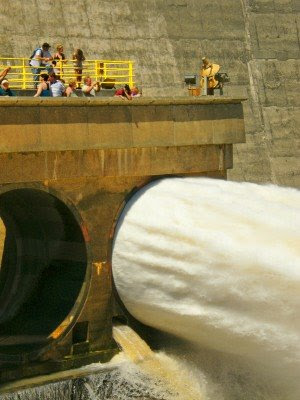 On a particular windy day we decided to take a tour of the dam wall. During the tour they took us down into the wall and we walked inside it to about halfway along the main wall. The cool thing they did during the tour was to open one of the sluice gates for us to see with what force the water gets released from the dam into the river below if the need arises.