Drama Princess is sports mad and very competitive.  In the winter she plays netball and tennis and in summer she does athletics and plays cricket… Yes, you read correctly.  My daughter plays cricket.  She is one of three girls in the Newton Park Primary u/11 team and on Tuesday they played their first game of the season against St Dominic Priory.  I love seeing the reaction of the boys in the other teams when our team arrives.  Not one but three girls. Imagine the embarrassment of going out to a girl or having her klap you to the boundary.

Check out the bowling action 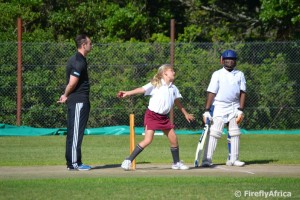 No fingers along the seam.  She rather rolls it over the seam and gets some turn.

Keeping the ball out the block hole

Waiting for the next ball

Unfortunately they came up short in the chase.  Can’t wait for the next game.
Tags: family, sport

Its THAT time of the Year again!