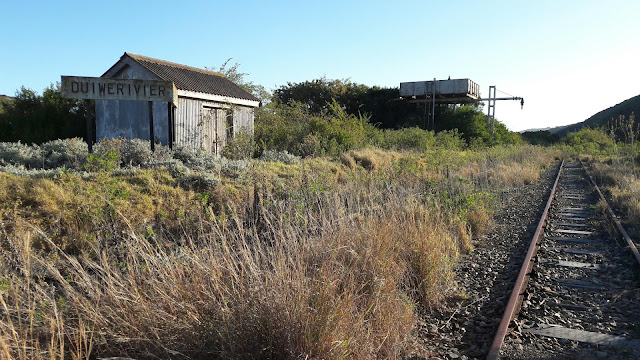 Last Thursday morning I did a presentation at a tourism stakeholder workshop in the Tsitsikamma and after lunch moved on to George for a weekend exhibit.  Having had some time on my hands I decided to veer off the main road and pick up a few Geocaches along Bo-Langvlei Road, the dirt road running behind the lakes between Sedgefield and Wilderness.  The plan wasn’t to do the whole road but only the last section of it starting between Bo-Langvlei and Island Lake.  My plan was just to Geocache and explore a bit so my camera was securely packed away in the boot of the Polo and I was just snapping pics with my phone along the way.
Turning off the N2 I hit the first stretch of dirt road which was nice and smooth with only a few bumps to negotiate.  The second cache on my list was located at the old Duiwerivier Railway Station.  It’s really sad to see how the railway infrastructure along the line has deteriorated over the ten years since it was closed due to flooding.  It’s going to take a bit more than just cutting back a few bushes and pulling out some weeds to get the train running along this track again. 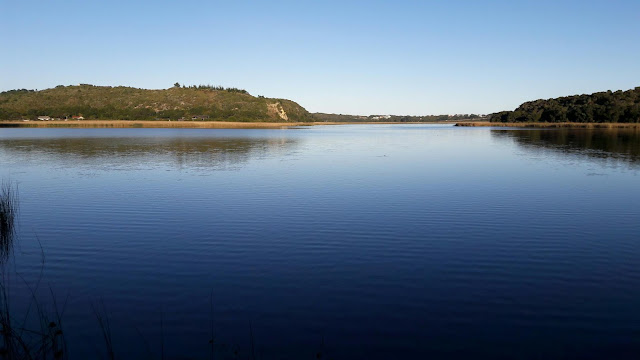 Leaving the station I started heading west and the next cache located at the back of Island Lake.  Standing on top of a beacon next to the road the view across the lake was stunning and although I could probably have spent a lot more time there it was time to get moving again. 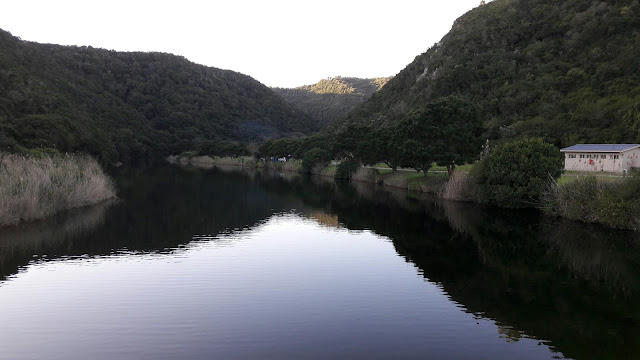 I passed the Hoekwil Road turnoff and proceeded along Waterside Road at the back of the Serpentine section of the river.  The next stop was at the bridge over the Touw River, one of the only bridges in the country that is shared by both the road and the railway line.  The bridge is located inside the Wilderness National Park with both the Ebb and Flow campsites located to the left and right of it.  While I was searching for the cache under the bridge a number of holiday makers passed by in canoes on the river.  I’ve still gotta do that.  The beautiful surroundings just reminded me again that Ebb and Flow is still on our list of campsites we want to stay at in future. 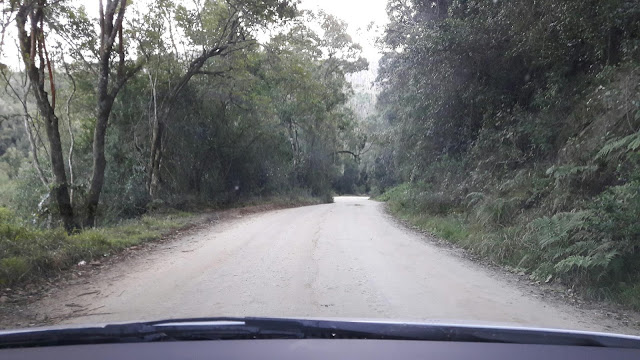 At this stage my plans changed slightly and I decided to backtrack a kilometer or two and take the Hoekwil Road.  This tar road took me way up the hill from where I could see the lakes district below, past the community of Hoekwil and onto the Seven Passes Road.  I’m kinda embarrassed to say that I’ve never driven the Seven Passes Road although I’ve heard how scenic it was.  The Seven Passes Road is the old road between Knysna and George and traverses, yes you guessed it, seven passes along the way.  The majority of the road was tar with bits of very good dirt road in between.  Along the top between river valleys were mostly open areas with farms while the valleys are covered in pockets of indigenous forest. 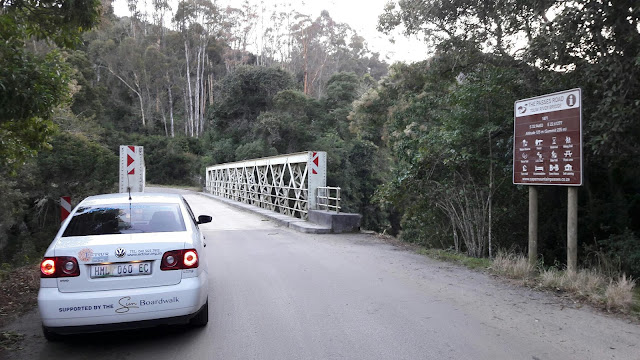 The first pass I drove through led down to the Touw River with an old steel bridge spanning the whiskey brown water that is so typical of the rivers and streams of the Garden Route. 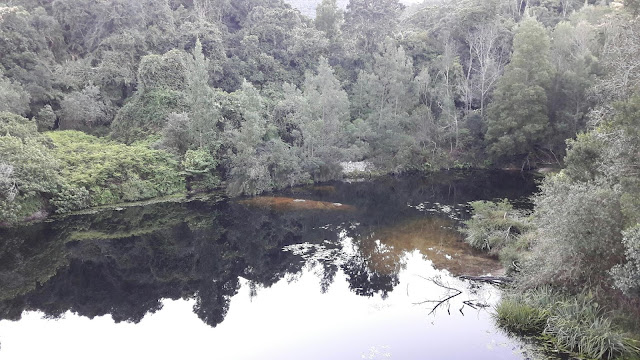 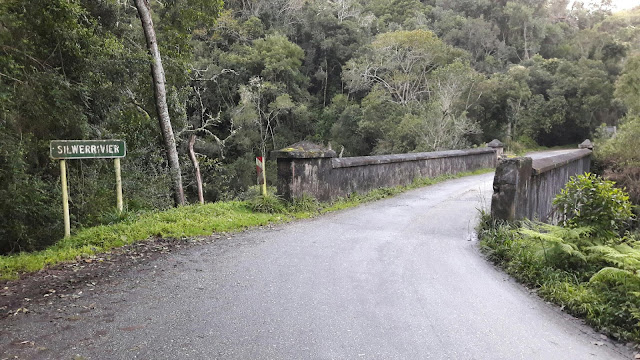 The second pass took me down to the Silwer River… 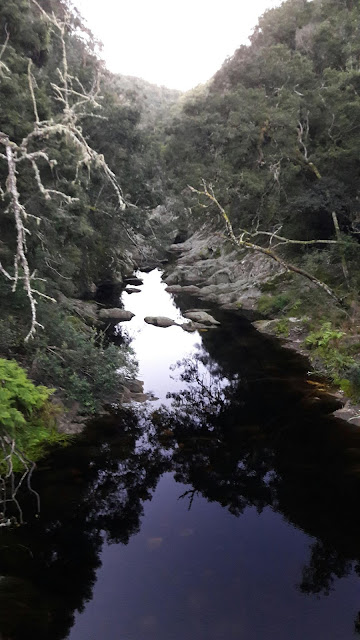 … and by now I was well and truly convinced that I had discovered one of the lesser known but truly worth discovering gems of the Garden Route. 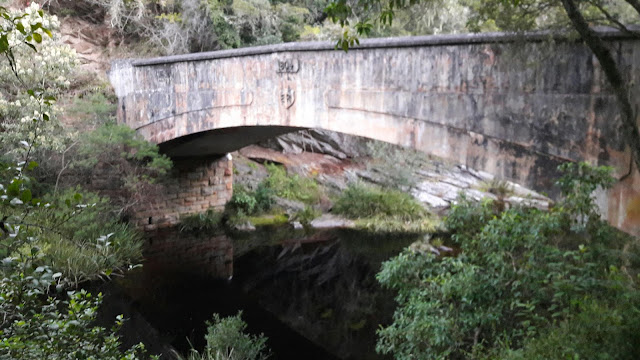 The last pass took me down to the Kaaimans River, well known for the pass on the N2 between Wilderness and George as well as the railway bridge spanning the river mouth.  But here I was away f
rom the hustle and bustle rush of the N2.  The sun was about to go under although it was getting dark very quickly at the bottom of the valley. 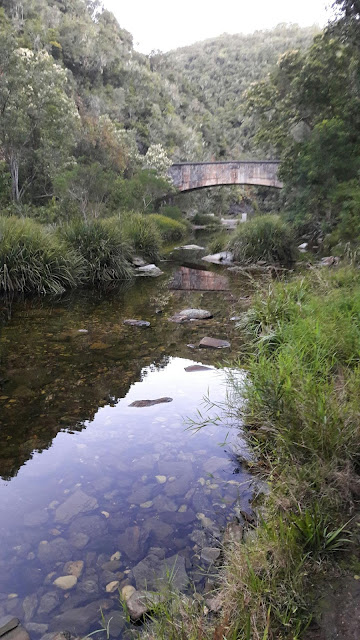 I parked just past the old bridge built in 1904 and followed a path down the river for about 50 meters or so towards the last of the caches for the day.  After a bit of a tough search I found what I was looking for with the help of my phone torch and on my way back to the car I just realised again how often Geocaching can take one off the beaten track and to places like this.  Places that you would often not have seen if it wasn’t for a cache being located in the area. 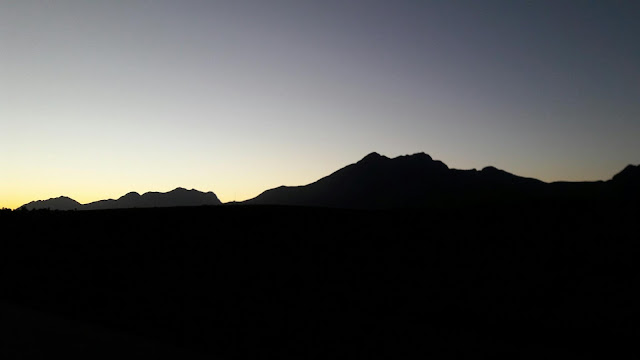 At the top of the pass the road spit me out close to the Saasveld Campus just outside of George with the silhouette of the Outenique Mountains beyond the town as my horizon.  It had been a very interesting and, frankly, relaxing afternoon and in my opinion a much better option that if I had just barreled along the N2 and sat around the guesthouse for the rest of the afternoon waiting to go and get dinner.  All thanks to a few containers forming part of a global treasure hunt game hidden along the way.
Tags: Garden Route, Geocaching, George, passes, river/stream, Western Cape, Wilderness

“We still Bezzy for the Moument”