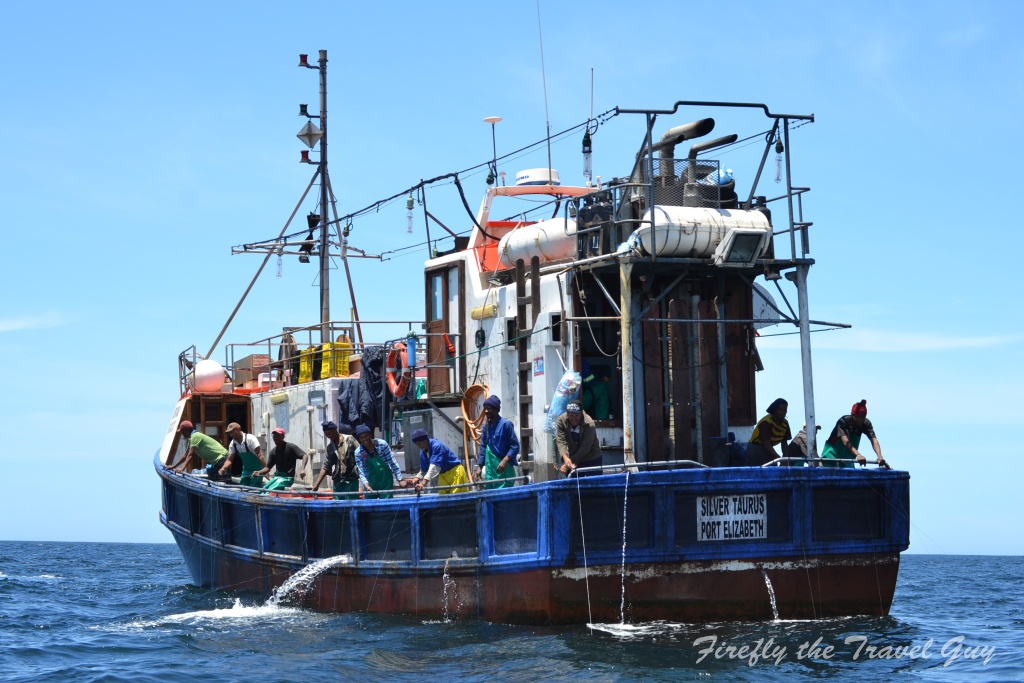 Fishing boats out in Algoa Bay and St Francis Bay are regular sights to residents and visitors of Port Elizabeth, Jeffrey’s Bay and St Francis. These boats can often be seen taking shelter in the bays when bad weather is forecasted and at night it looks like a town out on the water with all the bright lights out there. The majority of these boats are chokka boats with the region being home to the South African chokka industry.

The squid (or chokka) industry started in the early 1980’s with boats landing fresh chokka in Plettenberg Bay and Port Elizabeth and later in St Francis Bay. The export market developed very quickly as the South African species – Loligo Reynaudii –is very similar to the Mediterranean squid and fetches a higher price in Europe and Japan than it would on the local market.

According to Wikipedia, Loligo reynaudii, commonly known as the Cape Hope squid, is a 20–30 cm long squid belonging to the family Loliginidae. In South Africa it is known as either calamari or chokka. It was previously treated as a subspecies of Loligo vulgaris, the European squid

The industry began with a few operators and grew over time with many of the original skippers buying their own vessels and becaming owner operators. By the early 1990’s the first freezer vessels were being built that could stay at sea for up to 21 days. Squad could be landed, graded and frozen for export while sea, making these vessels virtually floating factories.

Chokka, often referred to as white gold, is caught by means of a hand line attached to a special coloured lead jig with a multi hook head and a plastic colourful float, called dollies. The dollies are connected to fishing line wound around a piece of wood, giving the fisherman something to control the line with. Crew can catch with two lines at a time, but an experienced crew can manage up to four lines at once.

The chokka is caught on the sea bed as well as just a few metres below the surface when they are in a feeding frenzy. Crews catch mainly at night, with the huge halogen lights on the boats attracting the different species of fish the chokka feeds on. These are the bright lights you can see out at sea at night. When the fisherman lowers the jig into the water, the little hooks catch the chokka’s tentacles and when he feels the weight on the line he pulls it up. The fisherman throws his catch into a crate and tries for the next one. The chokka is then neatly laid into a stainless steel pan, sorted according to size and blast frozen to -20°C on the vessel. Once frozen, it is then packed in a plastic bag and stored in the holding room until it is offloaded.

People are often concerned about overfishing of chokka. The chokka season is closed for close to 5 months a year and there are protected areas where they aren’t allowed to fish at all any time of the year. They also catch with hand lines as opposed to nets plus fishing is restricted to a number of permits issued. The squid also lives for a “year plus “naturally so the life cycle is short.

Suddenly I feel like a lekker plate of deep fried calamari, onions rings and chips. Plus now you know where your calamari comes from.