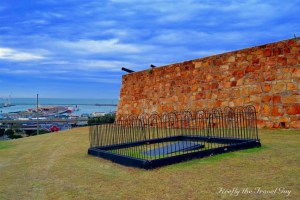 Captain Francis Evatt was born in Ireland in 1770 and arrived in the Cape Colony in 1806 with the 21st Dragoon Guards and served together with his brother for a number of years on the frontier.  In 1817 he was appointed as Commandant of Fort Frederick at a salary of 90 pounds a year (only half the pay he should have been receiving as Captain), a post he occupied until his death.
Captain Evatt played a huge role in the landing of the 1820 British Settlers and his assistance and the concern he showed towards the 4000 British settlers that arrived didn’t go unnoticed.  By 1825 Port Elizabeth was fast becoming an area of increasing importance and the Governor decided that a higher official power to be resident was necessary. Captain Evatt was appointed “Government Resident” whose function was to preside over court proceedings.
Captain Evatt was very prominent in the development of Port Elizabeth and always guarded the town’s best interests as best he could.  He was also instrumental in ensuring a place of worship was built in the town and laid the foundation stone of St Mary’s Church in 1825.
After a brief illness Captain Evatt died on the 21st March 1850 and was given a military funeral in the Congregational Cemetery in Russell Road.  His original tombstone can be seen in the porch of St Mary’s Cathedral while his remains were moved to a spot outside the Fort in 1956.
Source – Port Elizabeth of Yore: Fort Frederick
Tags: fort frederick, history