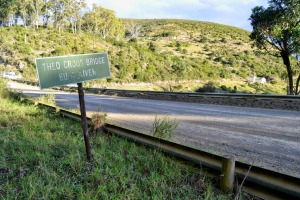 If you drive along the Elands River Road you pass over two rivers with dams visible on your left (if you are traveling westwards).  The Bulk River and Sand River dams both formed part of Port Elizabeth’s early water supply and dates back to the early 1900’s.  Both rivers are tributaries of the Elands River which in turn at its concourse with the Kwazunga River forms the Swartkops River.  I got to do a short kloofing expedition up the Bulk River as far as the dam (something you need a permit for so don’t all rush out there now) on Saturday afternoon and how I wish I could take my camera with.  You will have to settle for a pic of the Theo Crous Bridge over the river though.
Tags: bridges, Elands River Valley